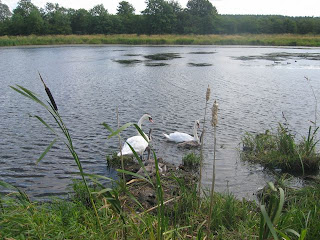 Ladyton Loch near Loudoun Kirk
I'm related to these people by marriage but I got interested in them because of the similarities with my miners from the Black Country and because Loudoun parish is my home patch.

One of my Price descendants married a Burley in 1900. William Burley, a miner, was born in Loudoun, lived in Glengyron Row, Cumnock, where both my ancestors and David's lived. Further research, back a generation, finds his parents Thomas Burley and Amelia Clary marrying in October 1872 in Loudoun parish. They lived in Loudoun Rows just outside Galston. His father Arthur Burley was a copper miner. Witnesses on the certificate were James Phillips and Ellen Burley.

It seems that tin and copper miner families including Burley, Phillips, Chynoweth, Harris, Luke, Bunney, Mudge and Toy all emanated from Cornwall and moved to Loudoun from around 1867. I think they were brought in because of a strike* but they went on strike too.

On 26 July 1872,  3 related couples got married in Loudoun Parish. There must have been some party that night!

Initially it seems they stuck together with their Cornish countrymen. I try to imagine how hard it would be for the locals to understand them and vice versa.


"In the 1860s there arrived in Galston a group of Cornish tin-miners as strikebreakers including Chynoweths, Burleys and Lukes, who still figure among the local families, Some of these were Methodists and held meetings which attracted some following. The original Methodist groups has not survived but a group which hived off from them formed themsleves in 1871 into a company of Open Brethren whose present day successors number about 60."